Farming can be far more than a profession or a bottom line. For some, it’s also a pathway to finding the satisfaction that comes from building something important beyond just ourselves – something of benefit to our families, the environment around us, and the world we leave for future generations. Meet two very special people who have traded the traditional model of career success for something they find even more rewarding. Welcome to little Grassy Creek Farm.

Farming is more than a business to people like Sandy and Laura Gabel. Sure, the money side of the farm is important. Very important. It takes money to run a 1,000-acre cow-calf operation anywhere, and it’s no different here in central North Carolina.

The cost of farming operations

Currently, little Grassy Creek has about 100 cows and 95 calves split among two herds. Separately, they have 17 replacement heifers (future moms, 3 bulls, and 2 or 3 feeders (cows on feed for harvesting). They all need shade from the summer sun and shelter from the winter winds, and of course careful monitoring for proper nutrition needs and overall health. Then there’s the cost of managing the artificial insemination program that produces healthy animals, as well as animals of the right type for this environment and with the ideal developmental traits. 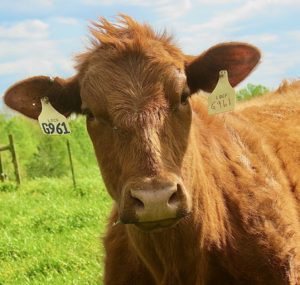 Vet bills have to be considered, as is the cost of genetic specialists for upgrading the herd over the long term. Probiotic regimens that aid digestion and nutrient absorption also must be thought through. There’s always a need for some new machinery, or an addition to the storage barns, or improvements to the water storage and distribution system. But thinking and planning are just the first part of the job of raising cattle.

Some piece of equipment always seems to need maintenance or repair. The temporary fences that define different grazing areas have to be moved every day, and posts replaced when an ambitious cow decides to expand her horizons.

Fixed fences that define the farm boundaries need mending, and some surrounding scrubland will make good pasture when it’s cleared. Existing grasses and ground covers need to be managed constantly to preserve productivity.

Here, no-till and other soil-protecting practices are the long-held norms, not some new idea or government dictate.

The herds have to be patiently shepherded from one grazing area to the next, and the temporary wire fences (none barbed, ever) relocated. And there always seems to be a few calves that need that little something extra to thrive – special food, special medication, or just plain old special personal attention. 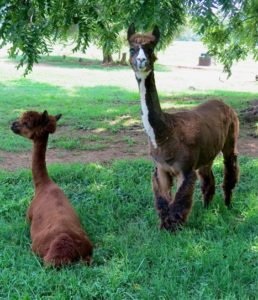 Then there are the other animals that seem to have accumulated since it all started here in the early 2000s. Seven horses, including a couple of rescues. Alpacas Max and Ziggy – another rescue story.

Chickens and guineas, and of course the German shepherd pup Shadow and big sister golden retriever Lynka curled up quietly in front of the iron stove in the corner.

From 5:30 a.m. till well after everyone else has gone to bed, there’s something that needs to be done. Something else that needs to be considered. Some new idea to think about, or some potential problem to head off.

“You never get everything done,” Sandy says in passing, with Laura nodding energetically in agreement.

Why would anyone give up a successful three-decade career in the high-flying world of the New York insurance industry for a life like this? What makes the bucolic world of cattle-raising in the rural mid-South more appealing than a life on Wall Street? In Laura’s case, why pass up the prominent career in education she enjoyed? Why trade all that for this?

“No, it’s a lot more than money,” says Sandy, in what soon proves to be his usual measured, quiet and reflective voice. “It’s more about finding something that gives real satisfaction.” He continues,

“Maybe satisfaction isn’t exactly the right word. This is passion.”

As sincere as his answer obviously is, it seems a little hard to accept – at first. But spend a day with Sandy and Laura, and you quickly recognize they probably have nailed it exactly right. It’s not just a chance to make a living. It’s a chance to actually live.

Sandy and I ride one of his well-worn ATVs for a quick tour of the farm, and an introduction to the cows and calves that wander slowly and quietly around us, like a rising tide of brownish-red Herefords. “We should have 110 moms, come September,” he observes as we ride among this particular herd. He sounds surprisingly like a proud parent.

“I’m really a grass farmer,” Sandy jokes as we ride. “I spend so much time thinking about what grass to plant, how to get it to grow, how to make sure it will stay productive. Grass is everything for an operation like this.”

We all seem to be so very – content. The sky is bright Carolina blue, the lush grass Sandy manages so carefully is so green that Ireland would be envious. The air is rich with the smell of nature. “You see the beauty of this every day, everywhere,” Sandy says in passing, almost under his breath. “In the animals. In the land. In everything.” On this day at least, God is in His Heaven and all is right with the world.

“How can anyone not be moved by this – at least a little?” Sandy just smiles, the corner of his mouth turned up ever so slightly at the visitor’s revelation of what he discovered long ago. “The word you’re looking for is serenity,” he says. And he is absolutely right.

The die for this special kind of life probably was cast very early in life. Sandy’s father was another successful businessman who grew up on a farm outside New York – not a play farm but a real working farm, with cows, sheep, pigs, chickens, and more. 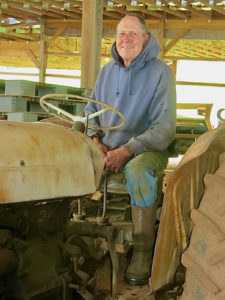 Even as Sandy’s father toiled at his career in the Big Apple, he also enjoyed the farm life on his own special North Carolina retreat, not all that far from where we sit today. Farming is in this family’s genes.

Graduating from nearby Duke University also probably played a role in Sandy’s decision-making. The growing Raleigh metropolitan area long ago swallowed up the old family farm that gave the family so much satisfaction. But proceeds from its sale provided the seeds for little Grassy Creek Farm between the state capital and the Virginia border. Initially, the land needed a lot of patient work to restore its productivity, “and to clear out a hundred years of accumulated garbage,” Sandy remembers.

The farm has grown steadily over the years, in size and sophistication, and so has the satisfaction that it provides. So what’s the secret, the magic formula for making the demanding world of cattle raising so satisfying?

“Our goal isn’t to maximize profits,” Sandy says over a cup of hot tea after our farm tour. “We probably could make more money selling specialized beef products to some of the local markets. I might even make more money planting some pastureland to specialty hays for the horse-feed market. But that’s not our big objective.”

The obvious follow-up question: what is?

We’re trying to build up an operation for our kids and future generations, they explain. We want to leave behind a farm that is built around doing the right thing in every aspect of our operation. In how we treat the cows. How we protect the land and the water. In finding better ways to produce beef, and do it in a way that works best for all of us, from the animal to the farmer to the consumer. In making farming an appealing way of doing something important in the world and finding joy in doing it.

“People today simply don’t understand our agricultural system,” Sandy says. “They take it for granted. They need to see how modern farming is important to all of us, and the whole world around us. To our common future.”

Laura agrees completely. “I think it’s fun to have people come out to the farm and just walk around and look at what goes on here,” she says.

“Giving folks a chance to ask questions gives children – and adults, too, for that matter – is the best way I can think of to teach them about what we do.” 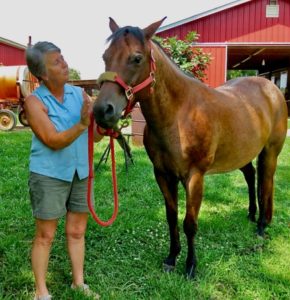 On-site visits may be the best way to educate people, but it’s far from the only way.

You can hear him telling them ‘good morning’ which is something he always does – and that’s one reason why our herd is so settled and docile. Sandy’s out there every day among them, and it makes a difference.”

When Sandy and Laura say things like that, it doesn’t sound idealistic, and certainly not corny. These are people who don’t just say things like “do the right thing” and “leave something lasting for everyone.” They mean it. They live it.

And after a too-short day with them, I see that they are right. And I know I should want to, too.

Farming is more than a business for almost all the men and women who provide our food. It’s also a source of personal satisfaction – and an opportunity to build the sustainable world we all want for future generations.  Remember that over dinner tonight – and to never take our farmers for granted. 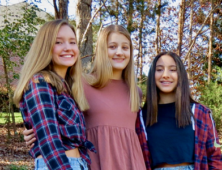 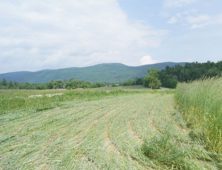 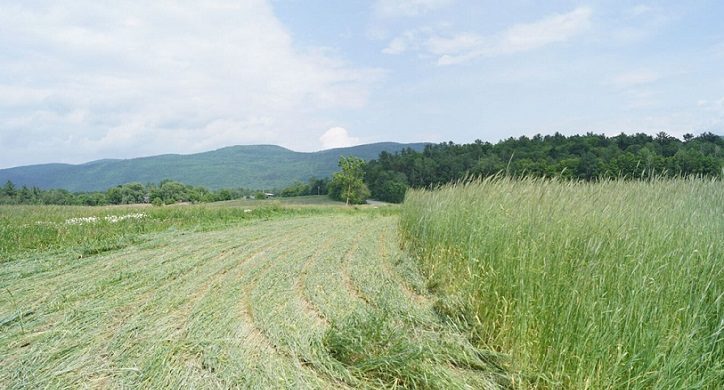 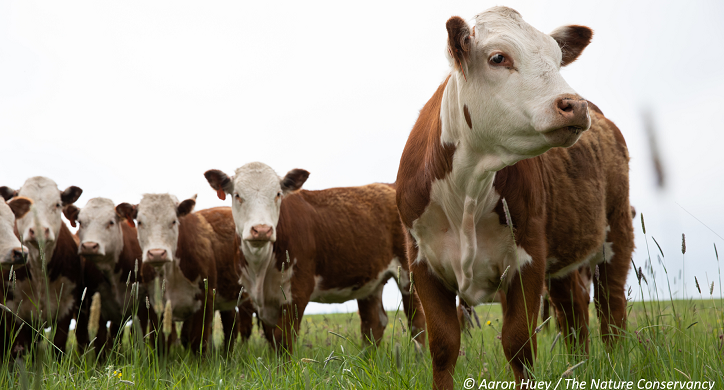 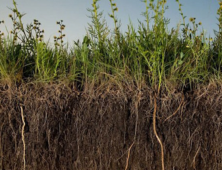 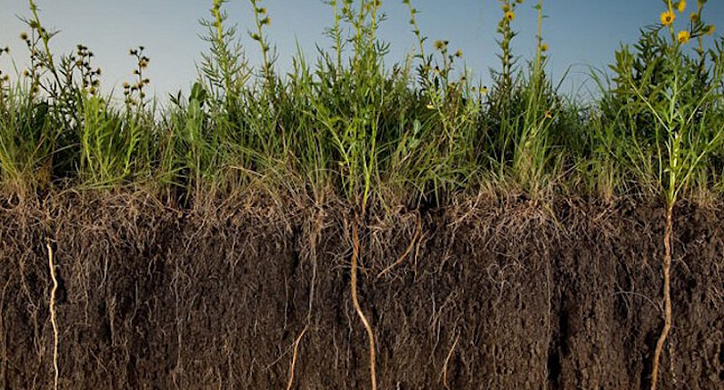 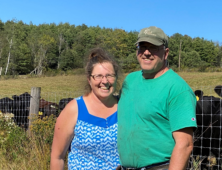