Flooding in the Midwest. African swine fever. China tariffs. These are just a few factors affecting the price of the food we place in our grocery carts each week. How do farmers and food manufacturers price their goods to maintain a smooth and steady delivery of the food we need at a price buyers are willing to pay?

Commodity markets wrestle with that question every day. And the job isn’t getting any easier.

Crop production reports. Weather. Stock levels. Economic outlook and currency trends. Producer confidence. Politics. Disease. Shifting trade flows. International conflict. And all of them are important on both a local and global scale. This highlights just how many things go into establishing the prices received by farmers and ultimately paid by consumers everywhere. Dirt-to-Dinner takes a look at just some of the things that go into determining the price of our food – and why consumers might want to pay attention.

Many traders expected the USDA to forecast a low corn crop harvest due to all the flooding in the Midwest. But instead, it forecast a relatively strong yield at 169 bushels per acre. As a result, futures prices for almost every major commodity plummeted. Analysts issued dire warnings of possible further price declines in the days and weeks remaining in the growing season.

This turbulent environment is a case study in just how complex the mix of factors shaping commodity prices – and ultimately the prices paid by consumers for food – can be. It also illustrates why these considerations are so important to the global food system – from the farmers trying to make a living off of these price fluctuations to the consumers who depend upon it for a steady supply of wholesome, affordable food.

Just another day in the dynamic world of buying and selling the world’s wheat, corn, and soybeans? Well, sort of, but the turbulent environment from early August is a case study in just how complex the mix of factors that go into the price of food in your grocery cart.

Traders start their market assessment with some simple supply and demand: high supply equals low prices and low supply equals high prices. Take the number of acres planted to a particular crop and multiply it by the yield per acre – the result is the total amount of that crop for that year. It’s the bedrock on which traders evaluate the likely available supply.

The Department of Agriculture (USDA) issues regular crop production estimates based on information gathered from across the country. Traders and analysts watched the August crop report very closely, looking for signs of just how much the unprecedented weather conditions in the spring affected the crop supply.

To much surprise, the August report painted a picture of another year of robust production – down a bit from last year’s exceptional crops, but still an ample supply of the building blocks of the modern food system – corn, soybeans, and wheat. The market’s response: a sharp downturn in commodity prices.

Why did the market respond the way it did?

Accurate predictions of final crop size are simply tough to make. For this year, in particular, there was the inclement weather. This spring’s heavy rains and flooding across many important agricultural areas meant that farmers couldn’t get into the fields to plant when they normally would do so. In some locales, dry conditions hindered crop development. Poor conditions also mean lower yields per acre. Unlike last year, when generally favorable conditions led to a more uniformly strong production pattern, this year seems to show a picture of spotty production – some areas very robust, others less so.

Nonetheless, USDA forecast overall wheat production to be holding steady from last year. The corn crop is projected to be down about 4% from last year (13.9 billion bushels), based on about the same acreage but lower per-acre yields. Soybean production, however, is seen as declining by almost 20%, to 3.7 billion bushels.

To further complicate the situation, this year’s production will add to the existing stocks of commodities. Stocks are those crops held over from the previous year – crops ‘in the bank’ so to speak.

For example, soybean stocks already stand at 1.8 billion bushels – up by almost half again the previous record high. By the end of the marketing year, some analysts predict the stocks overhanging the market will still total a record 1 billion bushels.

Did the USDA’s numbers alone justify the drop in prices? To better answer that question, traders had to turn to the demand side of the price equation.

Soybean markets highlight the importance of trade to the prices paid to farmers and the prices paid by consumers – and provide a case study of how so many diverse factors play into price. Soybeans provide the high protein meal and oil critical to growing herds of animals around the world – nowhere more so than China, and its increasingly large, commercial-style pork production industry. 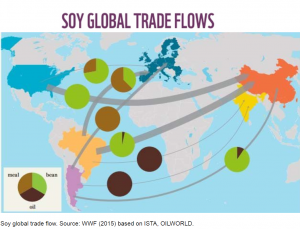 U.S. soybean production is down and stocks have surged because exports have declined, largely in response to the continuing trade dispute between the United States and China. All in all, U.S. soybean exports this year are down almost a quarter from last year’s levels to about 35.6 million tons.

China is the largest importer of soybeans in the world, and the United States traditionally is the largest exporter of the crop. At its peak, the China market represented 60% of all U.S. soybean exports. But exports of U.S. soybeans and soybean products to China are down by half – and for now, likely to stay at that level, given that China announced they have suspended purchases of all U.S. agricultural products.

China still needs soybeans to feed its expanding demand for animal protein, so they turned to the other major supplier in world markets – Brazil. A surge in demand adds incentive to expand production, and Brazil has faced increasing concern from the environmental community for its renewed efforts to clear more land for crop production. In fact, President Bolsonaro has encouraged deforestation – an unintended consequence of soybean tariffs from the U.S. and China. At the same time, the shift in global trade flows means a shift in transportation and logistical costs, complicating the pricing process still more.

However, the need to manage imports carefully as an element of their trade strategy, this development has further clouded the outlook not only for Chinese demand for soybeans but for other basic crops and farm products, as well.

On an even higher level, the pricing process must consider macro-economic conditions and currency rates. The Chinese, for example, lowered the value of the yuan to its lowest level in more than a decade. This makes Chinese goods less expensive for foreign buyers, thus helping offset newly imposed import tariffs.

Meanwhile, back on the farm…

All this uncertainty has another important effect – on the farmer. Farm income has seen a steady decline in the past five years, with more and more people across agriculture warning of a real income crisis on our doorstep. USDA’s Market Facilitation program authorized $14.5 billion this year in direct payments for grain, oilseed and other farmers adversely affected by the trade dispute. This is on top of $12 billion authorized for assistance last year, of which about $8.5 billion was actually paid out, largely to soybean producers.

More and more farmers are willing to openly question what the future holds for them. It creates an additional layer of uncertainty that must be factored into the price decisions traders are forced to make every day. “What will farmers plant?” is no longer the primary question. Increasingly, more and more people across the agricultural sector ask, “Will they plant at all?”

Why should consumers care?

The average consumer never has to contemplate the dizzying array of factors that go into finding the price for the basic commodities on which our food system is built. After all, we all enjoy an incredible selection of food products, at a fraction of the cost when compared to the rest of the world.

USDA forecasts food price increases of 1-2% in 2019, driven largely by higher costs for dairy products, vegetables, and fresh fruit. Current grain and oilseed prices are expected to help hold the line on prices paid for poultry, beef and veal (rising an estimated 1-2%) while pork prices may actually decline a bit as soybeans and soybean products previously going into export channels overhang the market.

The Department of Agriculture’s Economic Research Service (and the National Farmers Union) estimate that the farmer’s share of the food dollar continues to decline. In 2019, the farmer’s share is just 14.6 cents, down 17% from 2011 and at the lowest level since such analysis began.

All that is the good news.

But the more important consideration may be the long-term implications – the effect of uncertainty and potential price volatility that can be created by factors far more complex than crop size. Take a look at the 2008 global economic crisis as an example. We saw commodity prices rise when supply and demand tightened. Food prices spiked that year by 6.4%, followed by another increase in 2011-12 of more than 5%, following drought and various environmental problems in key production areas. We’re always one weather calamity, or one political dispute, or one economic crisis from a completely changed price picture.

This summer’s market turbulence is a wake-up call to us consumers that commodity and food prices reflect matters of grand economics and immediate trade conditions like weather, politics, and trade. The commitment of the American farmer and rancher to maintain a responsive, productive agricultural sector demonstrates a dedication to keep our food supply moving forward, no matter how challenging the market.