Are Farmer Protests in India a Cautionary Tale for Americans?

Why are tens of thousands of farmers across India having a tractor rally protesting new government laws? New farm laws are changing the way farmers can market their products which raises many questions about the implications of such changes for farmers and consumers alike. Efforts to provide government subsidies for farm producers while maintaining artificially low food prices for consumers have created an explosive social and political situation in India. It’s a cautionary tale for food systems everywhere – including the United States – about keeping social objectives and market economics aligned.

What’s behind the protests?

How can you keep food prices low for consumers but expect farmers to pay more to grow that same food? The brouhaha between farmers and the government of India began in 2018 with the passage of three farm laws altering long-standing farm policies. In simplest terms, the laws sought to change the way most farmers sold their products into the market, largely by deregulating wholesale markets. Rather than rely on the traditional middle-man system of wholesalers as purchasers, farmers would be allowed to sell to other commercial entities, and to use electronic and other new mechanisms for finding buyers.

On the surface, it all sounds very reasonable. The idea: give farmers more freedom to seek the best deal for what they produce. They no longer would have to rely only on the middlemen to provide the minimum guaranteed prices dictated by the government.

But change is rarely warmly embraced. And for India, the idea of reform affects not just the interests of farmers and overall food security, but the national economy and social structure, as well.

Over time, opposition to the laws has steadily escalated. News reports around the world tell of tens of thousands of protestors, many living in tent cities indefinitely, and many using tractors and other farm equipment to block and disrupt traffic to call attention to their cause. Video footage of angry men and women has become commonplace, seen by consumers around the world.

What prompts such intense debate – and protest?

To understand the impasse between the government and farmers, it’s essential to recognize the unique nature of Indian agriculture.

Farming and agriculture represent by far the largest component of the country’s employment. In India, just over half of its 1.3 billion people rely on agriculture for their livelihoods. Some credible estimates say as much as 70 percent. That means any changes to fundamental agricultural policies stand to affect between 600 and 800 million people in very meaningful ways.

In the United States, by comparison, farmers represent only 2 percent of the total population. The food and ag sector accounts for about 22 million jobs – or roughly 11 percent of our national workforce.

Despite the presence of a robust commercial farming sector in the United States, the overall agricultural picture in India is dominated by small land-holdings. America and India have comparable arable land areas. But the average farmer in India works roughly two and a half acres of ground, compared to the average U.S. farm of 444 acres. The prevailing small size of India’s average farm limits income opportunities and discourages investment in equipment, infrastructure, and other productivity enhancements.

Many farmers simply eke out a year-to-year existence. In many cases, their families have to live on less than $1,000 a year. They look to state support as the principal means not of growth, but of basic economic survival. This struggle to survive on very low, if any, profits, has manifested in over 300,000 farmer suicides since 1995. In 2018, there have been an average of 10 suicides a day.

So Indian agriculture isn’t simply a food-producing sector. It is a cornerstone of the entire society. Since the 1960s, national policies have attempted to accommodate both needs.

Protestors are deeply concerned about what happens to the government-guaranteed minimum prices for commodities such as rice, wheat, sugar, and other staples, which drive annual production on even the most un-economic farms. These supports have assured ample supplies for the domestic marketplace – and economic survival for millions.

In some instances, this policy has made exports possible. Today, for example, India is one of the world’s leading producers of wheat, cotton, groundnuts, fruits and vegetables, and even livestock — and among the largest global producers and exporters of rice, sugar, and wheat.

To protect consumers, the government has provided additional subsidies to keep prices low for basic foods, including rice. On one hand, food prices have to remain low to alleviate hunger and poverty and on the other hand, the low food prices are making life extremely difficult for over half the Indian population. This financial double-whammy of supporting two sometimes opposing sides of production and consumption can lead to unbelievable price distortions.

For example, the price of rice on the Chicago Mercantile Exchange (CMA) was actually lower than the fixed government price of rice in India, the largest rice-producing country in the world. A metric ton of rice costs $233 on the CME yet it costs $254 a ton for consumers in India. “A kilo of rice, which has an economic cost of 37 rupees to the taxpayer, is sold to two-thirds of the global population for 3 rupees.” as reported by Bloomberg’s David Fickling and Andy Mukherjee. Wheat support prices in India were 25 percent above the prevailing Chicago wheat futures price, the report also noted. To shield consumers, subsidies make the cost disparity magically disappear.

Changing market prices may have altered the arithmetic since that day, but the larger point remains valid.  Subsidies can distort markets – and create unintended but difficult consequences.

Is there a future for small and independent Indian farmers?

Proponents of reform say existing policies are simply financially unsustainable. Opponents of change say the risks are simply too large for too many people – and the threat to social order too great.

Both sides in the dispute say they won’t budge. All three farming laws have been passed but suspended by the Indian courts as discussions among farmers, farm groups and government officials continue. 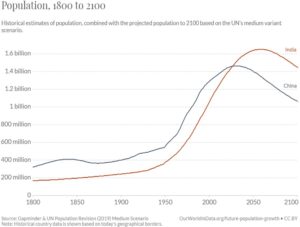 But the clock is ticking for India. As the debate drags on, India’s population continues to expand. As it does, the twin responsibilities again emerge. Population growth means more mouths to feed – and more people dependent upon agriculture for their livelihood.

Various international agencies and institutions project that India will become the world’s most populous country within this decade. The total population is projected to climb from 1.3 billion to 1.7 billion by 2050 – within what amounts to a single generation.

That means another 400 million consumers and job seekers will enter the fray – well above the entire current population of the United States, and only slightly less than the number of people in the 27 nations making up the European Union.

The situation in India may add a perverse new economic dimension to the notion of agricultural “sustainability.” Can the country continue to afford the enormous expense of the current approach? Or must it seek some form of greater engagement with an open, competitive marketplace? What approach will best allow Indian agriculture to survive? What’s best for both producers and consumers?

What does any of this mean to Americans?

For the average person watching the video of men and women protesting the new laws, the situation may seem a world away. The truth is that decisions made in the coming months will have an impact on food prices, availability, the stock market, and more. And the same goes for here in the U.S.

Most obviously, the simple humanitarian aspects of the situation should matter to everyone. We are all food consumers.

Food is something we share. It unites us and ties us all together in a shared common basic human need. It is a cornerstone of the philosophy behind Dirt-to-Dinner. When any person’s food security is at risk, we all should pay attention.

For students of the global food system, the outcome will have important ramifications for how food moves around the world.  India already is a major factor in many global markets – rice, cotton, sugar, and wheat, to name just a few. Future policy decisions will help determine whether that involvement in global markets expands – or not. If India’s producers elect to apply their productive capacity to capturing more foreign market opportunities, the world will see an even larger player in the international food marketplace.  Consumers everywhere could have more choice, and also enjoy the discipline imposed on food prices when nations truly compete to supply the world’s food needs.

On another level, the situation in India should provide a cautionary tale for food consumers everywhere. It demonstrates the importance of making balanced decisions about the agricultural policies and programs that create our modern food system. It shows what happens when our best intentions — to provide food and incomes for all — veer too far from economic reality. The tragic decline of Venezuela’s economy and rampant food insecurity already have provided one important object lesson in fundamental food economics. It’s a lesson we all need to remember, from Delhi to DC, and everywhere in between.

Finding a solution to this enormous challenge will shape India’s ability to feed and provide livelihoods for a dramatically growing population – and the role the country will play in the international trading system that helps feed our world. It should also remind us all of the need to balance good intentions with solid economics in our own food policy.  Legislators and administration officials will do well to keep the lessons from India (and Venezuela) in mind as they seek to craft improvements to existing U.S. farm policy.