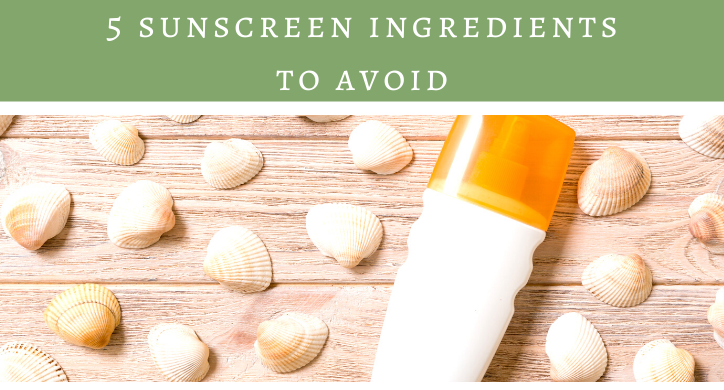 Whether you’re looking for quick information, or want something to impress your friends at dinner, here’s our Featured 5 of the Week!

We all love to spend time outdoors during the summer, which is why it’s always a good idea to have sunscreen on hand and ready to go. However, did you know that there are ingredients used in some sunscreens that may be more harmful than they are beneficial? We’re here to tell you which ones to avoid!

Homosalate is a chemical used in sunscreen in order to help the body absorb it. This is due to the fact that avobenzone, the main ingredient in sunscreen, can’t protect our skin on its own.

Some negative effects that studies have found is that, since homosalate is absorbed into the skin, overuse can cause it to become toxic because our bodies can’t get rid of it faster than it accumulates. Homosalate has also been shown in some studies to negatively impact reproductive hormones in both men and women.

Many added chemicals in sunscreens are seen as endocrine disruptors, however, sunscreen advocates say this only happens when it is excessively used.

Octinoxate is a chemical that is commonly used in sunscreen. Although we do not know the exact effects this ingredient could have, it’s been shown to have some harmful effects.

Octinoxate was created in the 1950s as a way to protect skin from UV rays. It comes in many different names, such as octyl methoxycinnamate, escalol, and neo heliopan. The FDA placed a restriction on the amount of octinoxate that’s allowed, which is a 7.5% at max.

Probably the most harmful effect that octinoxate has been seen to have is on reproductive organs. This includes causing a lower sperm count and changing the size of the uterus. It’s also been found to be an endocrine disruptor, which means that it can disrupt hormones and threaten a fetus in a pregnant woman or a newborn baby.

It’s good to note that these studies have mainly been conducted on animals. Effects could be different on humans, however, it’s better to be safe than sorry! 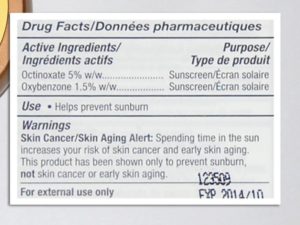 Octocrylene is most beneficial when used with other UV-ray protectants.

Studies have been conducted to see if octocrylene is an endocrine disruptor, like octinoxate. Researchers have found that, if the concentration of octocrylene does not exceed 10%, it should not cause any harmful effects in humans. However, it is still a photosensitizer, which means that it increases free radical production in our skin, which could increase our risk of skin cancer and premature aging.

The real concern with octocrylene is associated with our aquatic life. In fish and other aquatic life, octocrylene can cause problems with development, damage to DNA, and negative effects on the reproductive system. Higher than normal amounts of octocrylene have even been found in seafood that we consume.

Avobenzone is the main active ingredient in sunscreens, however, it’s broken down in the sun in about 30 minutes, making its effectiveness seem questionable.

Avobenzone wouldn’t be able to protect us as well if it weren’t for the added chemicals we’ve listed in this article. These chemicals put together create the UV-ray skin protectant we want and need. However, it’s hard to believe that overuse of any chemicals on our bodies is a good thing.

The Journal of the American Medical Association found in their study that avobenzone, along with other chemicals in sunscreens, absorbs in the body through the skin. However, they said more research is needed to make any conclusions and that people should continue to use sunscreen.

Other studies have shown that avobenzone could turn toxic when it comes in contact with chlorine, but no conclusions have been made.

Oxybenzone is another commonly used ingredient in many sunscreens, and it is the one most investigated by the FDA for having potential negative side effects in humans.

In their fourth national report, the CDC found that 97% of people they tested had oxybenzone in their urine. It’s been found in some studies that oxybenzone can cause contact and photocontact allergic reactions, meaning an allergic reaction upon contact to skin and also when exposed to the sun, hormone disruptions, and has also been linked to Hirschsprung’s disease, which is a disease in the colon.

Other problems are with oxybenzone in water. It is not easily removed from the water, even by normal wastewater treatment plants. It’s also been linked to coral reef bleaching, and has even been banned in Hawaii, along with octoinxate, for causing hormone disruption, coral bleaching, and coral death. 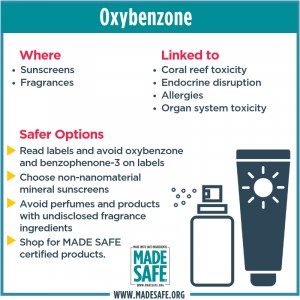 For more information on sunscreen and healthy sunlight exposure, read our article here.

All 5 of these chemicals are ones that are commonly used and allowed to be used in sunscreen. PABA and Trolamine Salicylate were recently found as not GRASE by the FDA and are no longer used in any sunscreen. The FDA is researching the chemicals above and more in order to conclude if they are safe on humans or not.